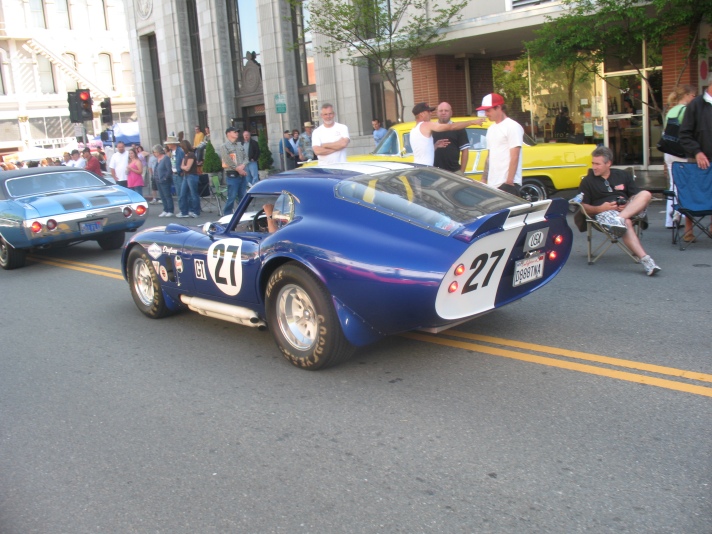 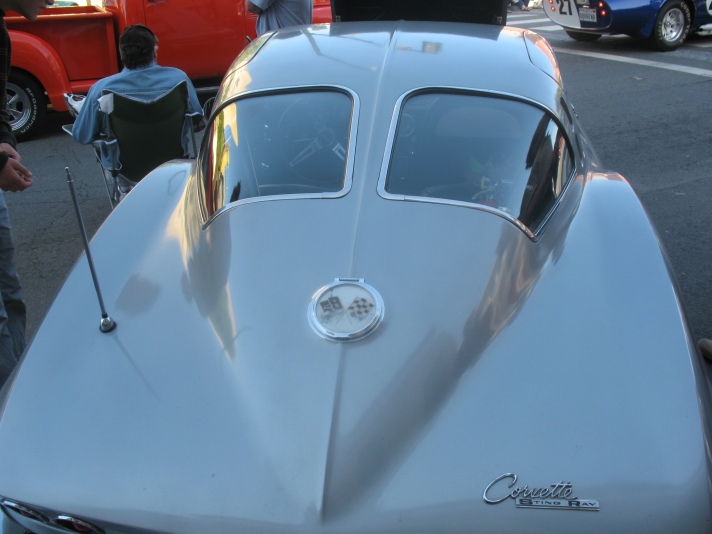 That is the theme of the movie, “American Graffiti”®.  I literally went back in time, when I went to an American Graffiti® tribute parade on Sunday.  I saw so many cool old muscle cars from the ‘50’s and ‘60’s, my eyes popped like popcorn, and my brain melted and oozed through my ears!  The rumbling El Caminos roared down the road, the Mustangs trotted down the street, and the belching T-Buckets and hotrods were hot enough to kill you!

My favorite truck was a Ford Model A pickup that had no roof!  It had ghost flames, a Chevy 400 small-block V8, and an umbrella!  Not just any umbrella!  It was also the gearshift!  Ha Ha!  At one point, the umbrella dislodged itself from its position in 2nd gear, and flew onto the windshield!  It was a good thing that it shoved the transmission into neutral!  Even though it stalled the truck, it was funny!  The driver was as cool as ever.  He just had his passenger get out and fix the umbrella.  Then, the truck started up again.

But, the car that I really wanted was a Shelby Cobra!  The body is made by Shelby American in Las Vegas, and then transported to a facility in Fresno, where the engine and all the other parts are put in.  My friend’s dad signed up to (possibly) win a red Cobra that was stripped down.  I want the other one, which is white and blue.  They both have 427 engines, mated to a Tremec 5-speed manual.  The red one makes about 460 horsepower, the other makes 550.  They know this because they dyno-test the engines.  When the Shelby rep turned on the blue and white one, it sounded a bit slow at first, but then became faster, until it was idle speed.  Of course, idle speed is at a mere 2000 rpm.  The red one only has 875 miles on it, but that’s because it only comes out of the trailer, into the trailer…  And the occasional parade…  The other, meanwhile, has about 6548 miles on it.  That’s because it was driven to Vegas to be signed by Carrol Shelby!  The rigs that they used to tow the Cobras were a 2010 Dodge Ram 2500 with a twin-turbo Cummins diesel!  Maybe it could win a drag race in towing…  The other was a 2004 Ford Excursion with the Powerstroke diesel.  The Excursion was stock, except for a Borla exhaust system.

But, back to the point.  There was an old Chevy business coupe that had the radio on.  This might seem normal, except for the fact that there was a song playing that sounded like somebody was murdering a cow with a butter-knife!  It sounded like:  Moowuocuouaouw…  And, the owner had stopped the car because of a stalled T-Bucket!  So, it went on for about 5 minutes!

All these old cars were working fine, but a newer car wasn’t.  On the way out of Petaluma, there was a young man in a Honda Civic hatchback.  He was in the middle of the intersection when it stalled!  He kept jamming the tranny into reverse, 1st gear, reverse, 1st gear…  Well, you get the idea.

Heading home on Highway 101, we saw a lot of the classics coming back from the parade.  Many of them were loud, and I saw many drivers wearing earplugs.  It was like a whole second parade!

Here is the website.  Even though the cruise ended three days ago, I still thought that you might want to look around on the website.  http://www.americangraffiti.net/index.html

I NEED that Cobra NOW!  It is awesome!  Al the summer jobs in the world might not be enough to pay for it!  I could dog sit from here to eternity, and not have enough money!  But, then again, they’d probably charge a ridiculous price for it!