So, I’m sure that most of you know that the San Francisco International Auto Show ended  sometime last week.  But, I CAN give you the inside scoop on a few cars…  At the Toyota stand, there were two Camry Daytona 500 Pace Cars that were unlocked!  Toyota did a great paint job on their Camry Pace Cars, so I just HAD to snap a photo of the Daytona 500 logo.

This was the Camry I was able to get into.  Even though Toyota put a five-point harness in, beefed up the airbags, and put an awesome paint job on, this Camry is totally stock.  It’s the newest generation (9th), an XLE model (V6, six-speed automatic, cool rims, leather interior, navigation system, Toyota Entune entertainment system, HID headlights, and it makes 268 horsepower!  WHEW!  That was a long sentence. 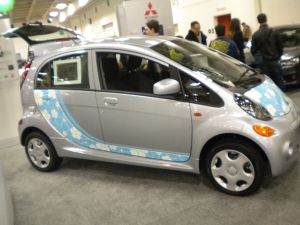 Sticking with the Japanese, the REALLY small Mitsubishi IMEIV took up almost as much space as a SMART fortwo!  The IMEIV looks a bit bigger than it is…  So, I went to the SFIAS (San Francisco International Auto Show) with my good friend Joshua Valentino.  While at the Hyundai stand, we met another car nut; Greg.  Since the Mitsubishi stand was right next to the Hyundai stand, we decided to take a look at the IMEIV.  Greg decided to try hitting the backseat with his elbow.  The backseat was so flimsy that it flipped BACKWARDS, taking Greg with it!  Joshua and I thought it was REALLY funny!  So, I’ll give you the inside scoop on the IMEIV.  It is all electric, built for eco-weenees who only have $10,000, want a car with 50 horsepower and 177 lb-ft of torque, and only drive 100 miles a day… 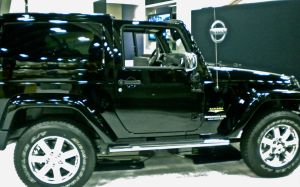 Over at the Chrysler/Dodge/Jeep/Ram stand, there was once a mighty Jeep Wrangler with lots of chrome…  Okay, I’ll stop with the bad poems…  This Jeep Wrangler has the all-new Pentastar V6, a six-speed automatic, chrome, beefy tires, and a leather interior.  Oh, and I almost forgot to mention that it has RUNNING BOARDS!!  Just 30 years ago, you had to weld running boards onto your surplus Jeep, there was no chrome, no Pentastar V6, no six-speed automatic, and no leather interior!  This Jeep is part of Jeep’s new way to attract buyers who want looks, power, off-road capability, and be comfy inside.  The Pentastar V6 makes 283 horsepower and 290 lb-ft of torque hooked up to a six-speed manual or automatic.  It has the option of rear-wheel drive, or four-wheel drive .

Staying American, we head over to the Fisker stand.  With their brand-new (good) Karma, Henrik Fisker, the man who penned the: BMW Z8, Aston Marton V8 Vantage, and Jaguar XJ220 believes he can sell 2000 Karma’s a year.  Priced at $81,300, the Fisker Karma is the working person’s cool car.  The Karma has a total of 403 horsepower and 960 lb-ft of torque, mated to a 1-speed automatic transmission.  It has a 3.73:1 rear axle ratio that helps propel it to a top speed of 125 mph! 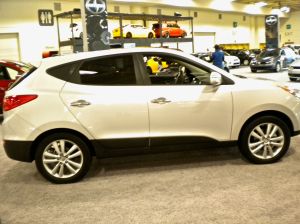 Straying back to Asia, the small SUV, the Hyundai Tuscon was a star attraction over at the Hyundai stand.  With it’s 176 horsepwer, 155 lb-ft of torque engine that’s mated to a six-speed automatic and in this case, four-wheel-drive, it can tow up to 2,000 pounds, haul 1880 pounds, go mildly off-roading, and go to a maximum speed of 112 mph.  Plus, it gets 20/28 mpg for city and highway, as tested by the EPA.

Thanks for putting up with my HORRIBLE poems and okay pictures (I promise better ones next year)!  Even though the show has ended (only five days ago…), I was thougthful enough to attach the website for you to look at sfautoshow.com

I hope to see some of you next year…

5 thoughts on “Even MORE Live Coverage from the San Francisco International Auto Show!”