The 2016 Ford Mustang is a great car, especially in the supercar-slaying GT350/GT350R form. It’s relatively fast, affordable, and can be easily modified. It turns out that the Yankee muscle car is now the most popular sports car in Germany. Why should they be worried?

In March, the Ford Mustang outsold the Porsche 911, Porsche Cayman and Boxster, and the Audi TT. It’s not that it’s inexpensive in Germany – a Mustang GT with no options costs about 50,000 Euros, while it costs $32,395 here in the U.S.

The Internet loves to trash talk the typical Mustang owner. A spike in high-profile crashes at car club meets doesn’t help with the Mustang’s PR either.

One of the problems that I have found about the Mustang is that the 1979 “Fox body” Mustang and it’s immediate successors were immensely popular and somehow durable. What does that mean? There’s a ton of them around, and used Mustangs are cheap horsepower. In 1979, there was a Dodge Challenger, which was a re-badged Mitsubishi Galant Coupe intended for the Japanese domestic market. The Challenger/Galant had a lifespan of five years at most, so it’s safe to say that your microwave has some Mitsubishi DNA in it!

Because the Mustang is so inexpensive, various misconceptions about the Mustang are out there. There’s nothing like a Porsche 911 or BMW M3 owner looking down on your ragged-looking Mustang GT with a set of Bilstein coilover shocks on it. Those owners have nothing better to do than look down at the lowly Mustang owner. Show up to a track day in a brand-new Mustang GT, and you’ll hear this kind of trash talk: the Mustang is heavy, it wallows, it doesn’t turn or stop very well, the rear end is uncontrollable, and you’re going to end up taking somebody else out when you spin. None of that is really true.

While the Mustang isn’t exactly light, the GT350R comes within 100 pounds of the BMW M4, a direct competitor to the GT350R. The steering in the GT350R is, according to pro race car drivers, worlds better than the M4. Don’t like the way it stops, even with the available massive Brembo brakes? That’s OK; the aftermarket will give you brakes that are IMSA (endurance racing) spec for less than half the cost of a single Porsche 911 GT3’s brake disc. You can walk into any Ford dealer, walk out with a Mustang in 45 minutes, and have a ton of fun. The GT350 (non-R model) is in a league of it’s own among four-seat performance cars. What about the Mustang being a tail-happy crash magnet? Well, the previous generation is notorious for that. It has a live rear axle, which wouldn’t be out of place on a Conestoga wagon, and couple that with 400+ horsepower, a driver who doesn’t know how to handle that much horsepower, and you know where I’m going. It’s mostly due to user error that there are so many Mustangs crashing. There have been a good deal of BMW M4 crashes as well. Trust me, it’s the same thing with Porsches.

If you haven’t driven a Mustang in a while, or your opinions are based on the old Mustangs with the live rear axle, I strongly encourage you to go down to the local Ford dealer and take a Mustang for a test drive. Any Mustang will do. Your expectations will be shattered.

Inside the Mustang, you’ll be pleasantly surprised. The fit and finish holds up against whatever Germany and Japan have to offer. The interior is both classic and modern. The seats hold you in a bear hug, but are incredibly comfortable for any person. The infotainment systems are easy-to-use, and you’ll never really want more out of them. You’ll get plenty of feedback from the steering wheel, and all of the controls feel like Ford pulled them out of an Audi.

While the Mustang might be a large car, it feels perfectly comfortable on small back roads. You know exactly where the car is, what it’s doing, and how much gas you can give it. The overall driving experience feels like something Mercedes-Benz and Audi would co-develop. The only real differences between any current Mustang and a BMW 4-Series are the high door sills in the Mustang…and the availability of a manual transmission with every engine!

But, don’t take my word for any of this. I’m just an 18-year-old car enthusiast who does all of his automotive homework. Just ask any German car enthusiast. Clearly there’s something amazing about the Mustang, or there’d be a spike in Audi TT sales. Don’t get me wrong – all of the major automotive magazines have given rave reviews of the TT. It’s just you get a whole lot more car for the money out of the Mustang. Even in it’s home country, the Porsche 911, Cayman, Boxster, or BMW M4 is a rare sight. Why? Because they’re really expensive to buy and maintain. While it’s true that the Porsche 911 GT3RS will leave the Mustang (and most cars) far behind at any race track, the 911 GT3RS is a very rare and expensive sighting.

Of course, most German car enthusiasts will say that this article is a load of garbage. Why? Because the March sales are an “isolated incident.” It’s just inventory availability, rebates, and the same occasional fascination with American novelty that sends so many European tourists to the U.S. to ride rental Harley-Davidson motorcycles along Route 66. But, what if it’s not an isolated incident? What if it’s a perfectly reliable indicator of things to come?

After all, BMW, Mercedes-Benz, and Audi have spent the past 15 years engineering any semblance of character and authentic heritage out of their vehicles. The same industry that introduced so many to wonderful cars like the air-cooled Porsche 911, the Mercedes-Benz 450SEL 6.9, the E39 BMW M5, the Audi Quattro, the E30 BMW M3, the AMG Hammer, and the Porsche 944, has abandoned those wonderful examples for 5000-pound SUVs making gobs of horsepower from high-tech twin-turbocharged engines, put down to the ground through fragile AWD drivetrains, all controlled by hundreds of pounds of self-destructive electronics meant to save them from doing just that. 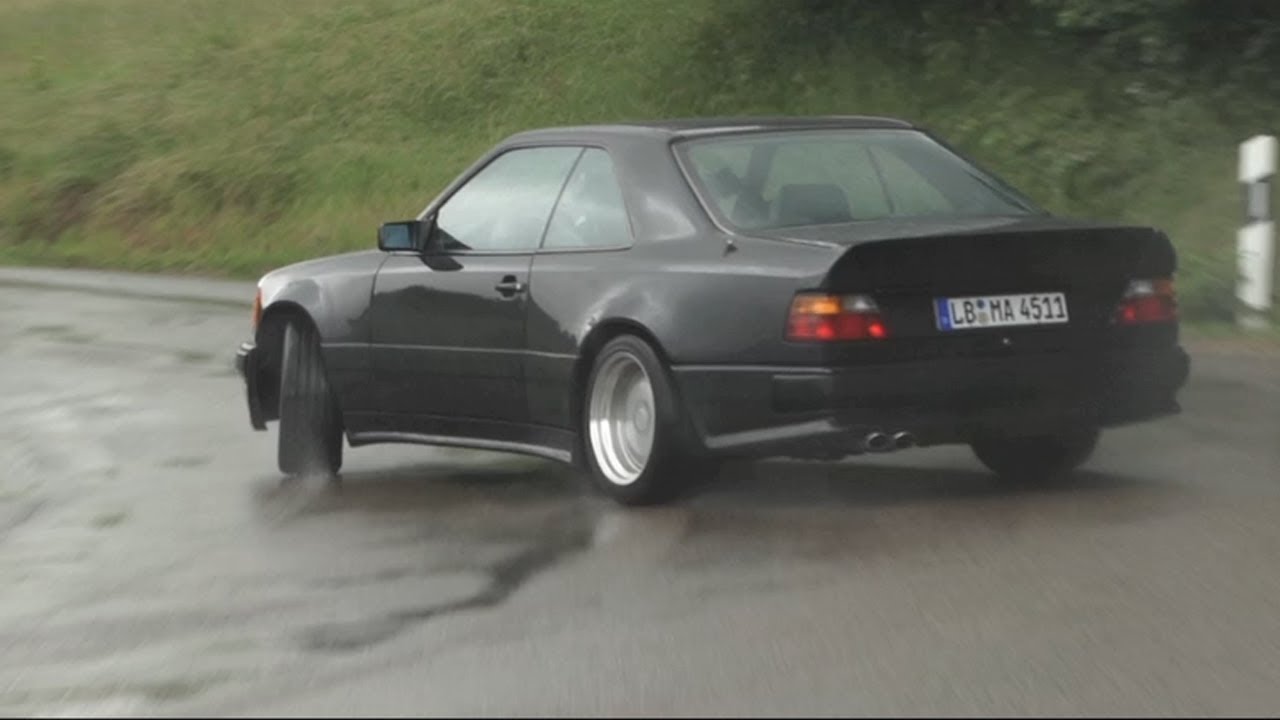 Let’s imagine that this isn’t just an isolated incident. Maybe the Germans are tired of driving expensive, self-destructive, massive transportation pods. They want something that reminds them of their dad’s AMG Hammer, their grandpa’s Mercedes-Benz 450SEL 6.9, their uncle’s Audi Quattro. They want something different. Something real. The Mustang will continue to sell in droves. Soon, the mighty roar and scream of the Dodge Challenger Hellcat will be heard across the Atlantic on the last unrestricted sections of the Autobahn. Trails once populated by Nissan Patrols and Mercedes-Benz G-Classes will be filled to capacity with Jeep Wrangler Rubicons. You’ll hear the bellowing shriek of the Corvette Z06 at the Nurburgring and the Hockenheimring. What’s that massive hulking truck taking up the tiny country road? Is it really a Ford F-250?

OK, I’m going to start to wrap this up. What does this all mean? No matter what happens, there is a very important lesson to be heard. American automakers got lazy during the late 1970s through the late 1980s. This in turn allowed German automakers to bring us incredible cars. Can you imagine picking a Lincoln Versailles over a BMW 528i, or picking a Cadillac DeVille over a Cosworth-powered Mercedes-Benz 190E 2.3-16 (2.3 is the engine size in liters, 16 is the number of valves)?

If German car enthusiasts are buying a Ford Mustang over a BMW M4 or a Porsche Cayman, that should be a message ringing loud and clear in automotive executive boardrooms all over Europe. The last time something like this happened, it was in 1989 with the Lexus LS400. That sent BMW, Mercedes-Benz, Audi, and Lincoln scrambling back to their drawing boards. In turn, that gave us such gems as the BMW 740i, a wonderful crisp, clean cruiser plagued by electronic maladies, and the Lincoln Town Car, which was a great car held back by the fact that it had a horrific drivetrain. The Lexus LS400 also inspired hideous cars like the early 1990s version of the Mercedes-Benz S-Class, which had so many electrical problems it was a miracle if the door opened.

It seems like it might be America’s turn. The German Big Three put peanut butter on their homework and gave it to their dog. America did the same thing 30 years ago, but they have made massive strides with their cars.

All of this is not to say that the BMW M4, Porsche 911, Cayman, Boxster, and Audi TT are horrible cars. In fact, it’s quite the opposite. They are all incredible performance cars that many of us would love to own, or at least go for a spirited drive in. This is a golden age of automotive performance, and the performance cars put out by various manufacturers (American or otherwise) are fantastic.

Ever since 2013 with the Bugatti Veyron Super Sport smashing world speed records for a production car, legendary Texas tuning firm Hennessey, and Bugatti, have been duking it out on runways with the world’s fastest “production” cars. Why “production?” Because these cars are made in extremely limited quantities.

Does that make them any less impressive machines? No, of course not. It just means that there is a very small customer base for these cars, and those who do own them rarely, if ever, exploit their full potential.

The Hennessey Venom GT Spyder won the latest battle in the speed war. It hit 265.9 mph on a 2.9-mile runway at Naval Air Station Lemoore on March 25. Who drove the Venom GT Spyder to such a high speed? None other than the Ford Performance Racing School Director Brian Smith. The feat was recorded by the independent speed testing firm, Racelogic.

The Venom GT Sypder proved to be much quicker than the Bugatti Veyron Super Sport Vitesse, which hit a still-impressive 254 mph back in 2013. That was a record-breaking run. Think that’s impressive? It is. The Bugatti Veyron Super Sport hit 268 mph in 2013 as well, and held that record for a year. The Venom GT hit an incredible 270.49 mph during a record attempt at Kennedy Space Center in 2014.

The Veyron is now out of production, and the much-hyped Chiron replacement should be out in the next year or so, according to Bugatti. Bugatti claims much higher speeds than the Veyron, along with a host of improvements. A blog post about the Chiron and all of Bugatti’s promises is in short order.

Anyways, this means that Hennessey can sit on their throne for a while. Don’t worry, Bugatti – or someone else – will come along and snatch the title.

The Venom (both versions) is powered by a twin-turbocharged 7.0-liter V8 with a dynamometer-proven 1,451 horsepower and 1,287 horsepower. That’s the kind of power you’d see in something meant to go down the drag strip. Hennessey claims a 0-60 time of less than 2.4 seconds. If something that’s RWD and has almost 1,500 horsepower can do that, put my name down for it!

Also, Hennessey’s timing couldn’t have been better. This year is Hennessey’s 25th anniversary. To mark the occasion, Hennessey will be selling three limited-edition Venom GT Spyder “World Record Edition” cars. How much are they asking? A paltry $1.3 million.

That’s the video of the world record for the world’s fastest convertible being smashed to pieces. Congratulations, Hennessey. Celebrate, and make the Venom even faster. Somebody is going to get that trophy soon enough.