Sorry, I should start a dramatic play blog!  I shall leave that to the Bard.  Our 2007 John Deere L110 Automatic’s (small tractor) mower deck isn’t allowing our mulching cover to attach.  The reason is that the mower deck has hit so many rocks and sticks, that it’s bent out of shape.  When my dad and I were trying to put the mulching cover on, it kept popping out.  We wondered why.  Maybe we weren’t putting it in correctly.  We were stumped. Then, I saw a HUGE dent on the side that had forced the mowing blade to shred (literally) the previous mulching cover.

Now, we have to detach the whole mower deck and take it to a welder.  Yuck!

P.S.  I am on vacation next week, so tune in on Tuesday, August 2!  If you tune in on August 2, then you’ll be able to see my road test of heavy machinery!  Come and see what it is on August 2!

Louis Joseph Chevrolet was born in La Chaux-de-Fonds, Canton of Neuchâtel, Switzerland on Christmas Day 1878.  In 1886, his family moved to Beaune, in the Cote-d’Or département (country subdivision) region of France.  It was there that young Louis became interested in autos, or anything that was motorized.  Soon after he moved to Beaune, he got a job in Paris, working for the Roblin Mechanics Shop; where he worked fixing bicycles.  In 1900, he emigrated to Montreal, Quebec, Canada.  In 1901, he moved from Montreal to New York City as a mechanic.  When he was in Montreal, he was working for the De Doin-Bouton “Mottorete” company (car biz).  In 1902, the company was bought by private shareholders, and Louis lost his job.  About a week after he lost his job, he got a telegram informing him that his father had just died.  He immediately sent back a telegram urging his mother Angelica, and family to come to the U.S.  On May 2, 1902, the Chevrolet family arrived in Brooklyn.

Eventually, Louis got a job at Fiat in Manhattan, working for the racing team.  In 1903, he watched his first auto race.

On a sunny and beautiful July 3rd, 1905, Louis Chevrolet married Suzanne Treyvoux.  His honeymoon was in Niagara Falls, in between races.

Not long before Charles was born, Louis got a job on the Fiat Racing Team.  Louis’ first documented race was on May 20, 1905.  He drove William Wallace’s 90 horsepower Fiat.  He performed considerable mechanical work on it.  Louis beat the previous one-lap mile record, which was 53 seconds.  Louis did it in 52.4.  He then went on to Chicago for an ACA race, where his Fiat developed radiator problems.  At his next race (with a repaired Fiat), he beat Barney Olfield.  Over the next 6 months, he would beat Olfield in 10 out of 11 races. During an early morning practice for the second Vanderbilt Cup, Louis went into a patch of fog and hit a telegraph pole!  Oh, and did I mention that he was driving a 110 horsepower Fiat?

On March 5th, 1909, Louis and Arthur (his brother) Chevrolet were hired by the Buick Racing Team.  In one of the races that Louis was competing in, he was leading, and his front suspension failed, giving the lead to Harry Grant.  Louis was able to bring the broken Buick to a halt safely.

In 1917, William C. Durant (founder of GM) thought that ‘Chevrolet’ had a pleasant sound to it.  He then pressured Louis to design a six-cylinder car.  Louis agreed and designed and built the first Chevrolet prototype.  Durant was wise in marketing the car as ” a fast, enjoyable family car designed by a race-car driver!” The car sold quickly.  Unfortunately, Louis’ relationship with Durant was loathing  at best.

Durant started pressuring Louis to design a lower priced car.  Louis retorted by saying that he did not want his name to be associated with a lower-priced car.  Louis sold his stock in GM to Durant and left, thus leaving an opportunity to become extremely wealthy.  Oops!  Louis went back to racing.

In 1928, Louis’s brother, Gaston was killed in a tragic racing accident on lap 146 in Beverly Hills, CA.  Louis, overcome by the loss of his youngest brother swore to never race again.  He sold all his race cars, and started to build race-car engines.

In the stock-market crash of 1929, Louis lost all of his life savings.  He died penniless in 1941, working on a Chevrolet assembly line, making Army trucks.

Thus ended the life of one of the greatest men in the auto and racing industry.

Now the title may be confusing, but we can’t watch the movie “Cars” here.  I haven’t figured out how to do that yet (its pretty embarrasing!).  But, I do have a link to a cool website called Car-Videos.com.  It has enjoyable videos of cars, a horsepower and torque definition page, a speed/rpm calculator, and lots of stuff that only God knows about.  This is a great website for the practical car enthusiast.  Here’s the link.  Enjoy.

The so-called ‘Elephant Motor’ is a 426 cubic inch Chrysler Hemi engine.  It is called the elephant motor because of its huge displacement (the volume of air displaced when the engine is turned a cycle by the pistons – in this casr, 426 ci), and huge power output (425 horsepower).  And that’s only in stock form!

The Elephant Motor was developed for NASCAR in 1963.  Its first race was in a Plymouth Belvedere, in 1964.  For many years, the 426 Hemi won many races in NASCAR.

In my opinion, the true Chrysler Elephant Motor is the 440 Six-Pack Hemi.  VROOM!

You know the old saying “An Apple a Day Keeps the Doctor away.”  Well, Here’s another saying: “A Bugatti Veyron a Day Keeps  Sadness away.”  Well, you shouldn’t buy one a day, as your house will be foreclosed on, but imagine if you COULD have one a day! Or how about one for a day?  I can…

But, I think I should get to the point.  When I was recently down in So Cal, I saw not one, but TWO Bugatti Veyron’s!  And, did I mention that I saw them both in 1 day!  Awesome!

One of them was on Rodeo Drive in front of the Bijan store.  Nice…  I couldn’t help but take pictures for you!  I was walking Rodeo Drive with my grandpa Jack, looking for something nice when I spotted the Veyron.  We went across the street and took some pictures.  Grandpa Jack knocked on the Bijan door, and we were beckoned in.  There was a small version of the Veyron inside a glass case.  We were told that it wasn’t for sale, but merely a display.  But, IF you buy a Veyron, Bijan will make a limited-edition Bijan Bugatti Veyron.  Are you Veyron owners listening out there?  I hope so.  I REALLY want a Bugatti like the Bijan one:  Yellow and Black on a black/carbon fiber interior.  Wow.  That car is positively the best-looking car ever!

The valet’s don’t know who owns it, because the hotel manager parks it.  He parks it in a spot where you HAVE to look at it!  Nice, huh?  The valets aren’t allowed to tell anybody who owns the Veyron (if they knew).  All they know is that it’s somebody extremely wealthy (or somebody extremely in debt!).  My Grandpa and I went back to see it.  Awe inspiring!

Are you ready for the spectacular specifications for the Veyron?

With all that horsepower and torque, can you imagine how hard it would be to drive with a six-speed manual transmission?  You’d have to be a Top Fuel Dragster driver (that is with a manual!)  Yikes!

One last picture to leave you with….. 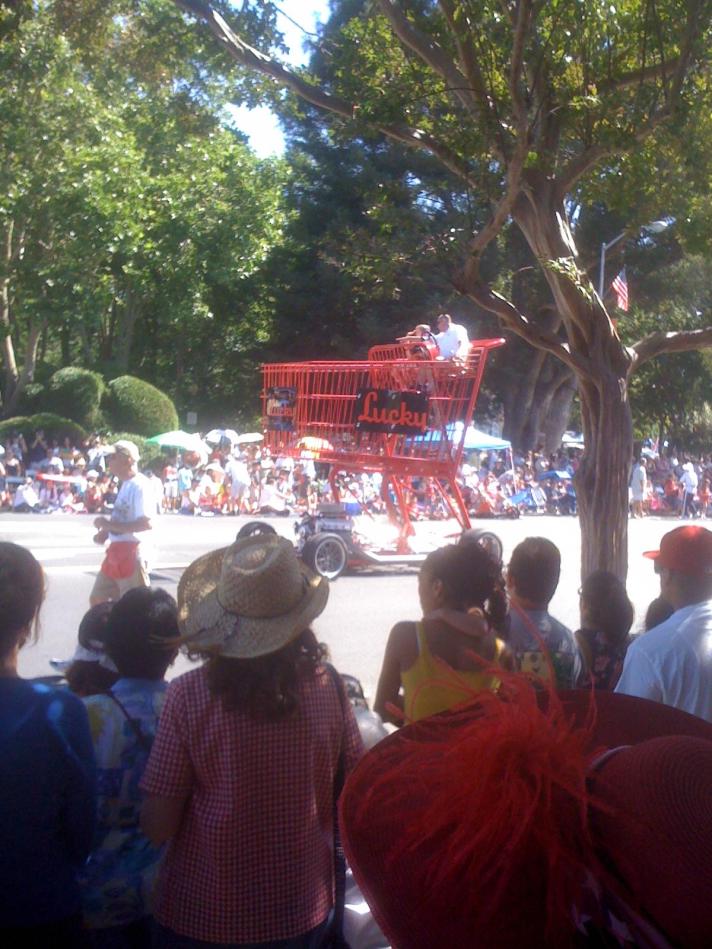 Waddaya think of this?  It can definitely hold all the food that my mom has to get when she goes to Costco…  If I can make one, I’ll be REALLY lucky!  This one happened to have a HUGE engine.  My guess is that it was  probably a bored and stroked GM ZZ502 Crate engine.  At least, that’s what it looked like.  It was basically a hot rod chassis with a huge cart body welded onto it.  My guess is that you can probably go up to about 60 mph before you lose control and the milk goes flying!

My dad and I think that the driver and owners have to go through a clutch per parade!  The driver is constantly riding the clutch and revving the engine! I saw this shopping cart at an Independence Day Parade near my house.  Everybody else was riding trailers pulled by concourse-restored tractors!

I know one thing for certain:  It definitely isn’t street-legal!  If it crashed, the driver would take flying lessons!   It might be fun to drive, but I wouldn’t want to drive it onto the trailer. 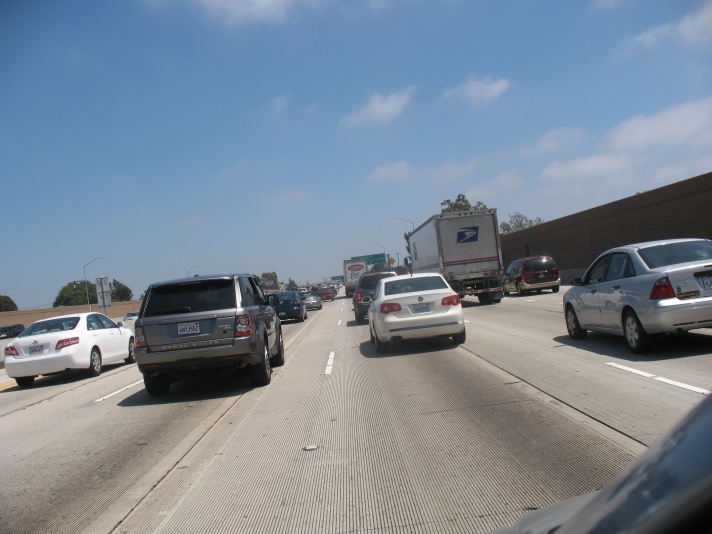 Answer: Listen to a good book on tape.

Have you ever been in the car going somewhere, and stuck in a traffic jam?  I’m sure you have.  I have.  Los Angeles, CA is one of the most congested cities in the U.S., along with New York City and Washington DC.