Why Supercars Aren’t Cheap to Maintain

Supercars are constantly redefining how crazy cars can be.  Think about the 1990s.  The McLaren F1 was the fastest car in the world until the Bugatti Veyron.  The Lamborghini Diablo wasn’t nearly as fast, but it was just as raw and pure of a driver’s car.  However, the car that one can argue defined the 1990s supercar wars was the Ferrari Testarossa.  It wasn’t the fastest, the most terrifying, or most exhilarating.  What it did do, however, was pave the way for supercars as we know them now.  Yes, that means being completely unaffordable to the general population and outrageous repair costs.

This blog post is by no means meant to make supercars from the 1990s and first decade of the 2000s seem like horrible messes of cars that are best left to be stared at in museums.  Drive these cars.  It’s what they’re meant for.  Grab they keys and floor it if you get the chance.  Just remember to set aside a LOT of money to repair them.  Oh, and find a really good mechanic.  Just because they say that they service European cars does NOT mean that they will service your Lamborghini Diablo.  They will, but they will likely do it badly and cause further damage to something that is expensive.  Ask them if they service your supercar.  They can usually point you to somebody who will if they can’t.

Many jobs require special tools for that car and that car only.  Your Craftsman toolset will do irreversible damage to your car.   Doing a simple task such as changing the oil, which might take an afternoon in your mom’s Toyota Camry, can turn into a five-day knuckle-bashing fest on a McLaren F1.  Let’s not even start on the Ferrari Enzo. 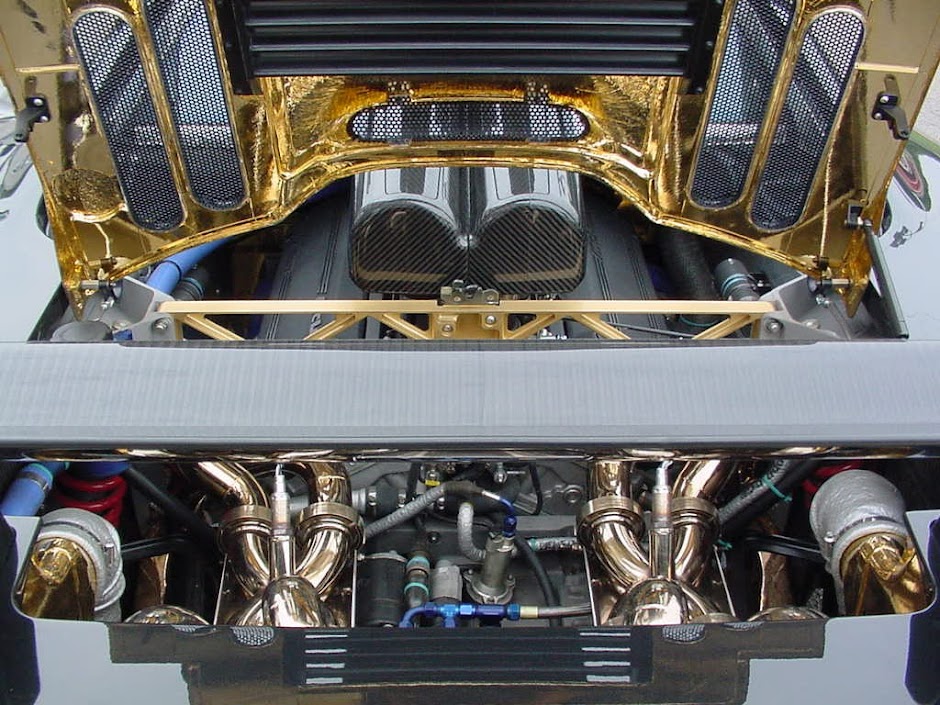 Yes, that’s a stock McLaren F1 engine bay!  The gold throughout the engine bay is actual gold leaf.  The exhaust is titanium, and no, the blue connectors are not for nitrous.  They are for fuel delivery.  That engine bay looks like a lot of fun to access!  No wonder it takes five days to change the oil…

McLaren estimates annual repair costs to be about $30,000, which doesn’t seem too bad until you find out that an oil change is $8,000.  You can even ship your F1 to McLaren’s factory in Woking, UK for repairs, where McLaren employs two full-time F1 technicians for F1 repairs alone!  That’s what Ralph Lauren does for his THREE F1’s.  Yeah, that blazer you bought is going to good use.  McLaren suggests replacing the tires in pairs ($3,000 per tire!).  McLaren scrubs in every set sold, for free.  That means that they custom-make the tires for free!  Service can take up to 6 weeks – not including transit to the UK.  It’s ten days door-to-door by air, seven weeks by boat.  The bright side?  The car is appreciating so quickly that repair costs will never catch up to their now-astronomical price.  Chumps.

This is the floor of the customer service department of McLaren’s Woking factory.  It might not be so bad to come here after all…

That being said, the McLaren F1 is one of the most amazing cars to ever come out of a factory.  It was the fastest car in the world for almost 20 years, and the driving experience is supposedly second to none.  It’s also going up in price really quickly.  Get one now if you want.  Yeah, your kids only need a semester at Stanford anyways!

This is a Ferrari Enzo engine bay.  Not exactly pretty, but it gets the job done!  I’m a fan of the massive intake manifold and massive shocks.  Those two gold tanks are gas reservoirs. An astute commenter corrected me – they are not fuel pumps, as I originally thought! They are gas-filled reservoirs that keep the fluid in the shocks, called damping fluid, under constant pressure. Given the massive speeds the Enzo can easily hit, a single small bump in the road could prove catastrophic, so these reservoirs are necessary.

When you buy an Enzo, you’d better have every single piece of paper detailing EVERYTHING that was done to it!  If you don’t, be sure to spend far more than the service cost off of the asking price!  When something goes wrong, it goes from a relatively inexpensive fix to a SNAFU in seconds.

Oil or shop fluids will irreversibly damage at least one $6,000 carbon-ceramic brake rotor, so a set of factory covers protects them during service.  I’m not joking!

Each authorized dealer must buy a $10,000 special tool kit and this scissor lift to work on an Enzo.  The massive V12 takes 12 quarts of oil.  That’s a lot.  Most cars take around 7.

Oh, and a word for the wise – warm up the Enzo’s big V12 with the $60,000 carbon fiber engine lid open, and the carbon fiber intake body will expand enough that the lid won’t close until the engine cools off.

This is a Porsche Carrera GT engine bay.  This car has long been the source of heated controversy, which only heated up after the tragic deaths of Paul Walker and Roger Rodas almost a year ago (they died on November 30.  I will do a one-year memorium post on that day).

Like every other Porsche, the Carrera GT gets an oil change every 15,000 miles.  No, it’s not based off of a semi truck engine, but good guess!  The entire car was a shelved endurance racing project from the 1990s, so it was built to be reliable.

Replacing the ceramic clutch is $25,000, including labor.  By comparison, a $30,000 full brake job is a steal by comparison.  You can see how these mechanics live well.  When the Carrera GT was new, dealers had to buy a special $10,000 table and $8,000 jig to hold the car’s engine during service.

Overall, maintaining a supercar isn’t easy or cheap.  Should you buy one of these cars, make sure that there is a piece of paper detailing everything done to the car.  You’ll thank me later.

8 thoughts on “Why Supercars Aren’t Cheap to Maintain”