When Cadillac introduced the 2nd generation CTS back in 2008, it blew the wheels off of the competition.  It was just that good.  It remains that good to this day, but it also happened to snare Motor Trend’s 2008 Car of the Year award.  That’s some pretty prestigious territory.  Caddy didn’t rest on their laurels for long.  They took the V8 engine out of the Chevrolet Corvette ZR-1, detuned it to 556 horsepower and 551 lb-ft of torque, and shoved it into the CTS.  Thus, the CTS-V was born.  The CTS-V was good enough to win multiple comparisons against the BMW M5, Mercedes-Benz E63 AMG, and even the Mercedes-Benz CLS63 AMG.  All of those cars that were defeated have been significantly updated and/or redesigned since 2009, but the CTS-V remains a high-water mark for GM.  Cadillac even added a coupe and a station wagon version for both the CTS and the CTS-V in 2011, and all of the CTS iterations are true champions.  For us mere mortals that want better fuel economy than 12 or 13 mpg, then the 2014 Cadillac CTS VSport might be the ticket to success.

When Cadillac started designing the 3rd generation CTS for 2014, their goal was to make the car leaner and meaner.  What they meant by that was make its dimensions larger to better compete with the BMW 5 Series, Acura RLX, Mercedes Benz E Class, and the Jaguar XF.  They also had to make it lighter.  That’s when forged aluminum and high-strength steel come into hand.  The 2014 Cadillac CTS is reportedly lighter by up to 350 pounds in some versions.  But, I want to talk to you about the 2014 Cadillac CTS VSport, which is the car that is a step below the still-available CTS-V.

Cadillac has said in multiple press releases that they will use V6s whenever possible.  Not only are they able to cram more technology into the V6 engines, but the V6 design reduces weight.  But, won’t BMW and Mercedes-Benz have V8s in their 550i and E550.  Won’t Cadillac be bringing a butter knife to an RPG fight?  Not necessarily.  The 2014 Cadillac CTS VSport’s twin-turbo 3.6-liter V6 makes 420 horsepower, versus 400 horsepower (probably much more than that, according to dyno tests) for the Bimmer, and 402 for the Benz.  However, torque is down a bit, compared to the competing V8s.  The CTS VSport’s engine makes 430 lb-ft of torque, while the BMW makes an astonishing 450 horsepower, and the Benz makes 443 lb-ft.  But, the CTS has a better power-to-weight ratio, with 9.5 pounds per horsepower.  This will make up for any power deficit.  The BMW makes 10.9 pounds per horsepower, and the Benz makes 11.3.  Cadillac also has a new turbocharger intercooler plumbing, which pretty much eliminates any turbo lag.

Cadillac claims a 0-60 time of 4.4 seconds out of the 2014 Cadillac CTS VSport, but Motor Trend got 4.7 seconds.  It’s not a bad thing for an auto magazine to be a bit off the time, because the engineering team has been developing the CTS VSport for a couple of years now.  Cadillac also got a quite respectable quarter mile time of 13.1 seconds at 108.4 miles an hour.  That won’t catch a Corvette, but it will embarrass a Ford Mustang with the V6.  The 0-60 time and quarter mile time are enough to send the Germans hustling to the drawing board.  The standard Brembo brakes will out stop a BMW 550i or a Mercedes-Benz E550, with a short stopping distance of 103 feet.  That’s good enough to out stop a 2014 Corvette Z51.  Put the CTS VSport up against an Infiniti Q70 (previously the M37/M56), and it’s pretty much even.  Motor Trend tested a M56 last year and got 4.8 seconds to 60, and it then went on to blast through the 1/4 mile at 13.1 seconds at 108.1 mph.  Remember, these are all in controlled, nearly-ideal settings.  DO NOT attempt this at a stoplight!  I don’t want you to reenact the rental-car bashing scene from Days of Thunder!  As awesome as that was, Ford and Chevy paid a lot of money for those cars to be thrashed like that.  You’ll be paying that amount of money for repairs!

Also new is a ZF eight-speed automatic transmission also found in the Rolls-Royce Ghost, Range Rover Sport, and many other cars.  It senses corners up ahead, using the sonar sensors in the front bumper, as well as the adaptive cruise control radar box.  It then downshifts or upshifts at the appropriate moment, and supposedly does its job quite well.  GM added a function to the transmission called “Performance Algorithm Shift,” which basically renders the steering-wheel-mounted shift paddles useless.

There are a couple of different trim levels offered for the CTS VSport.  There is the CTS VSport, which is a perfectly luxurious car in its own right, starting off at $59,995, and that mode has a large number of options.  The VSport Premium trim tacks $10,000 to the price, bringing the price up to $69,995.  When I “built” a car on Cadillac’s website, the 2014 CTS VSport Premium that I optioned came in at $71,745.  Granted, that’s when it’s got the optional high-performance brake pads and sport seating package.  If you decide to buy a VSport, I recommend getting it with the following options:  Analogue gauges (you’ll have a display that you can personalize in between the speedometer and tachometer), no sunroof, and a quite presentable interior.  You’ll also want to get the optional high-performance brake pads (Brembos).  All of that will ding you a grand total of $60,005.  Not bad, considering you can smoke a BMW 550i for $5,675.

You can check out the 2014 Cadillac CTS webpage at http://www.cadillac.com/cts-sport-sedan.html.  Enjoy noodling around on the website and building your own CTS VSport.  Build one to your desired specifications, and then tell me how much it cost!  I’ve also attached a couple of pictures, from the requests of a couple of readers, so enjoy them. 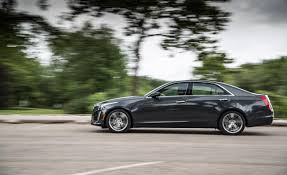 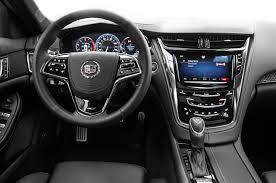 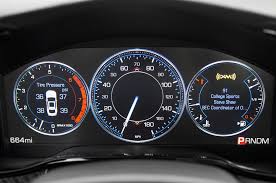