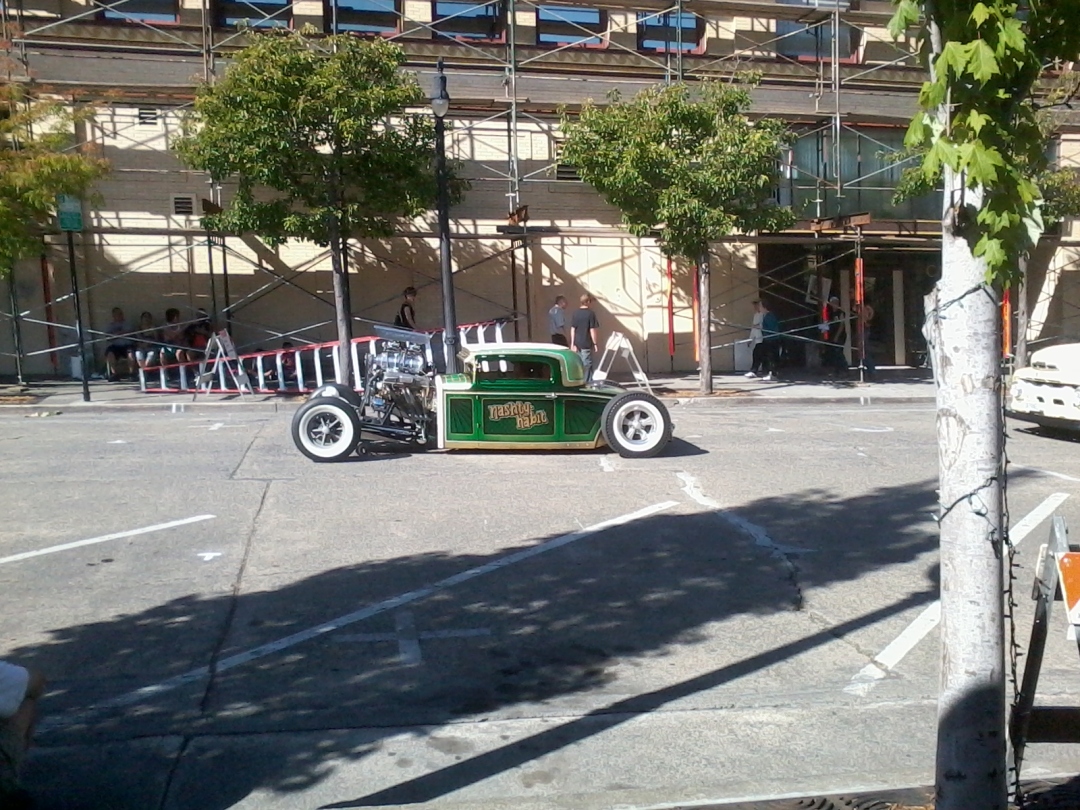 Remember my post last year on the 2011 American Graffiti Salute?  Well, the 2012 Salute topped the 2011 in just about every way!  I know that you’ll DEFINITELY agree with me when you see all the pictures…!  For many of the pictures, I will provide what information I know…

This 1966 Chevy Corvette Sting Ray has some nice candy-apple-red paint that would make a cherry jealous.  I have no idea what engine and transmission are under the hood, but I’d like to take it for a “test drive…”

What I DO know about this even MORE amazing 1963 Corvette Sting Ray with the hallmark split windows is that the original owner bought it new with the high-performance 427 V8 and the Muncie “Rock-Crusher” M21 four-speed manual.  Lovely.  Even better at 125 mph…

My cover photo of “Nashty Habit” is higher-resolution than this picture, but here’s the info:  Nashty Habit has a 454 engine from a souped-up Chevelle and a five-speed manual from G-d knows where.  The wheels are custom-forged, and the body and chassis are from a 1931 Nash.

This 1950s Ford step-van looks and sounds to be original.  But then again, who knows what secrets it might have under the hood…

This 1992 Shelby Cobra replicar has a Chevy Corvette Z06 engine and a Mustang five speed manual.  I know this because I was walking by and saw the sign for the car (hence the information on all the cars). 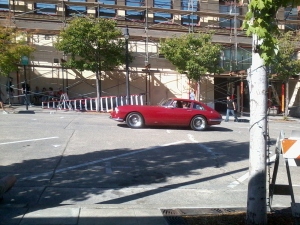 Remember this E-Type/60’s Ferrari replicar from last year?  If you don’t, it’s got a new Ford 5.0 liter Coyote crate engine that pumps out somewhere in the general vicinity of 500 horsepower.  VROOM!

This 1938 Graham Town Car was bought new by the owner’s grandfather, and has been passed down generation by generation.  The car was frame-off restored in 2003 by the current owner.  Apparently, it’s more comfortable than a 1960’s Cadillac or Lincoln.  It’s got a full leather interior, seats five comfortably, and gets 21 mpg.  And I almost forgot to mention that it’s got close to 240,000 miles on the odometer! 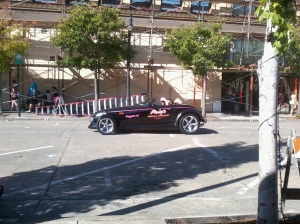 Please DON’T ask me WHY this 1995 Plymouth Prowler was in the parade!  My guess is that it is NOT a delivery vehicle, but simply an advertising piece for the pizza parlor!  I don’t know HOW “Pinky” got the car into the parade! 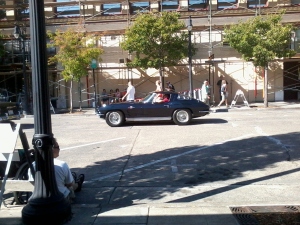 This other ’63 Chevy Corvette Sting Ray Split Window Coupe was bought in 1993 in very dilapidated condition.  It needed a lot of work, but it IS a rare fuel-injected ’63 that they bought for something ridiculous like $6,500!

This 1962 Ford Thunderbird has the high-performance 390 cubic inch V8 that slurps fuel at the ridiculous rate of 8 miles per gallon!  But, it IS very fun to drive and only has 23,000 miles on the clock.  It must be really hard to not use all 480 lb-ft of torque when passing a Prius!

This lovely 1957 Ford Ranchero pick-up has almost 100,000 miles on the clock and has been owned since new by a local Ford fanatic!  It has the easy-to-drive 390/automatic combo, and most of those have been used towing old Fords around!

This 1949 Mercury Club Coupe has a large 8.1 liter engine from a  2002 GMC Sierra pickup.  It may not have a lot of horsepower, but it’s got enough torque to make a bulldozer jealous!  VROOOM come literally!

This amazing 1970 Ford Torino Talladega has a numbers-matching 428 Cobra Jet engine and Muncie M21 transmission that send power to the rear wheels via yet another numbers-matching Ford 9-Inch rear end.  The tires are Goodyears that have better traction than a Formula 1 race-car!  VROOM should come in epic doses on THIS car!

This rare forest-green/black Dodge Challenger T/A could look better in my opinion, but it’s fast, so that’s all that matters…With the historic 426 Hemi engine mated to a four-speed-manual, this car can go up to 140 mph!  But it probably comes at the expense of comfort and fuel economy.

This quite amazing Pontiac Tempest was built just two months before the GTO came out in 1962.  Bought new with the high-power 326 V8, this car DEFINES the phrase “fun in the sun!”  It’s been a daily driver since the day the owner received the pink slip.  It’s had not one, but TWO restorations (1981, 2009) in it’s 180,000 mile career!  I would LOVE to drive this car if I could!

This 1946 Willys JEEP was bought just a few years ago from the original owner, and the owners enjoy every single mile that they rack up on the odometer!  These old JEEPs are some of the toughest vehicles in the world, often going up to 400,000 miles before they are made into cheap toaster ovens.  I hope that THIS JEEP doesn’t follow the same route as it’s siblings – civilian-issue JEEP’s from the 40’s are very hard to find, always fetching up to $20,000 for the better ones.

This lovely 1953 Mercury Club Coupe is all-original, and has been owned since new by the original owner.  It’s got the extremely rare “Skyroof” glass roof and the even rarer “Aquamarine Blue” paint.  It may not be fast, but you’ll get there in style!

It’s nice to know that the owners of these late ’60s-early ’70s Cadillac “Land Yachts” take pride in their cars, and take them to parades.  They are nice cars, but they are big, hard to drive, and slow.  But, they are very comfortable, and effortless cruisers on the Interstates.

This chopped Chevy half-ton pickup has a Chevy 350 c.i. engine that pumps out way too much horsepower and torque for something this old!  One could call it a street racer, but I prefer to call it a random creation! 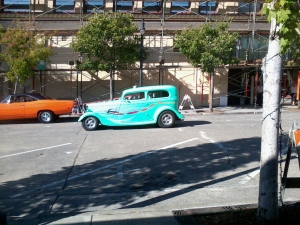 This 1934 Ford Tudor sedan has been thoroughly souped-up, but it has Ford 460 C.I. V8 and a leveling kit that makes a smooth ride when racing a GTO!  Plus, it’s got a Rockland Standard Gear Tranzilla T71 six-speed manual that can handle too much torque! 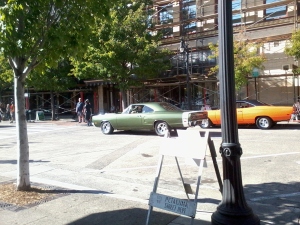 This 1966 Plymouth Roadrunner is all-original except for the brand-new Cragar rims and B.F. Goodrich tires.  It sounds simply amazing, and I’m sure that just about anybody would like to drive it!  I would…

This faithful 2004 Shelby Cobra 427 replicar has just about everything (and then some) on it!  To the untrained eye (which I’m sure that none of you have!), one might assume that it actually IS a ’64 Cobra, but they would be so wrong that it would be bordering on stupidity!

Remember this classic Studebaker Hawk sedan from last year?  If you don’t it’s got the small six-cylinder that has only 120 horsepower, but everybody (and I mean EVERYBODY) was giving these people the thumbs up!  They were cool (literally) because of the cool old air conditioner that sucks air in and cools it before it blows into the cabin!

This is the last amazing picture that I will show you, so I’ll give you all the tough specs on this 1950 Ford F100 pickup.  It has the powerful old six-cylinder engine and goes about 40 mph, but is pretty cool!  I wish that I could have seen some awesome readers of the Unmuffled Auto News there!  Well, see you next year!